More Notes from the “Office Guy”

Q: Hey Guy, I’ve been working in the Word Web App (online version of Word) for a while, but recently (and without any notice) I looked at the top of my screen and noticed that the appearance of the command buttons on the top of the screen had changed. I also didn’t see every button that I was used to seeing. What gives?

A: Well, once again, Microsoft has made a change to the appearance of the screen to better manage what I like to call screen real estate. As more users migrate to Office 365 and the online versions of the Office applications they are also tending to want to use these products from devices with smaller screens (smartphones and tablets). So, what you are seeing is called the Simplified Ribbon.

So, before we take a closer look, let’s review the “traditional” Ribbon. This was introduced back in 2007 and at the time represented a radical change in the look and feel of the Microsoft Office products. For those of you who have been using these programs long enough, there used to be only a limited number of visible command buttons at the top of the screen displayed on what were called toolbars. Problem was there was not enough room to show buttons for every command available, so if a button wasn’t available you had to dig into a menu to find the command you needed to use.

Ribbons turned this on its head – so instead of drop-down menus (lists of commands to choose from) Tabs were introduced. When you clicked on a Tab, it would reveal a different part of the Ribbon and there were many more visible command buttons to choose from. The buttons on the ribbon were organized by name into what were called Groups (subdivisions of the Ribbon). So, you now had many more buttons to choose from and less commands to memorize. There still wasn’t room on the Ribbon for all available commands, so some Groups also contained dialog box launchers (small square buttons that opened dialog boxes of additional commands). To refresh your memory, here’s an illustration:

What this meant was that the user interface was now much more graphically oriented and less reliant on users’ ability to memorize the names of all the commands needed. But, this new interface came at a price of increasing the amount of screen real estate needed to display all the command buttons and Group names. But this was also the era where most computer-based tasks were still being performed on desktop or laptop computers that for the most part had relatively large screens.

Now that we’re into a new era where increasingly computing tasks are being performed on mobile devices with much smaller screens the Ribbon became a liability because of the amount of the display that had to be dedicated to showing all the commands. In a sense the Simplified Ribbon represents what I like to call “back to the future”. Instead of a tall Ribbon, the Simplified Ribbon still shows the names of the available Tabs, but only one row of command buttons (kind of like the old toolbars). This takes up less space at the top of the screen so more of the document is visible on a smaller device screen. Let’s take a look at the Simplified Ribbon:

There are still Tabs at the top to access different parts of the Ribbon, but there are no Group names along the bottom, and no Dialog Box Launchers are visible. Since there isn’t as much room to display command buttons it doesn’t mean they don’t exist anymore, you just have to dig a little deeper to find them.

Here’s two things to looks for on the simplified ribbon: A button that looks like three dots (…), or a button that has a drop-down arrow attached to it. Either of these types of buttons indicates one thing – there are more options available when you click them.

Here’s an example of the ellipsis: 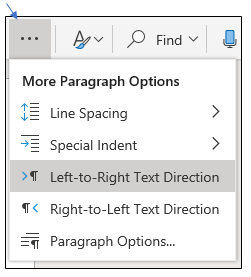 Clicking the ellipsis shows additional paragraph formatting commands that can be access from the menu that appears.

Here’s an example of a drop-down arrow: 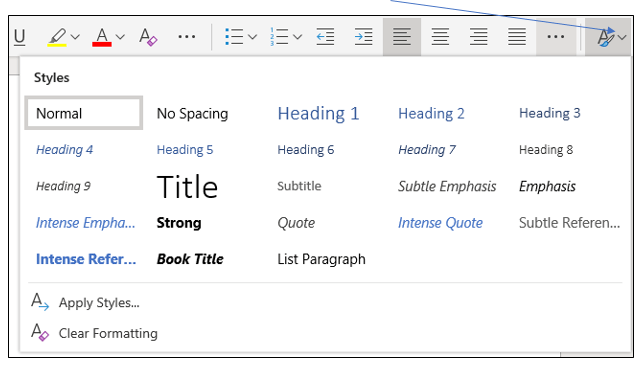 Clicking this button would reveal a listing of Styles to choose from (instead of showing each style as a separate button).

When the switch is in the position shown, you will see the Simplified Ribbon. If you use your mouse you can drag the slider to the left to restore the traditional (full height) Ribbon:

A final thought is that as of this date, Word Online (the Web App version) is the only Office product currently displaying the Simplified Ribbon by default. But the Office products are now constantly evolving with new features getting pushed out with each update cycle. Don’t be surprised (or alarmed) if/when the Simplified Ribbon starts to appear in the other Office Web Apps and even in the desktop versions. It’s your choice to decide how to manage your screen real estate.